Reader, I have been asked on many occasions what the best gig I have ever been to has been. I will be slowly approaching near 30 gigs by the end of this year and honestly, I couldn’t tell you.

Its disgruntling when I see the disappointment on people’s faces when I can’t give them a direct answer. So having seen a gig three weeks ago and about to see another in the upcoming weeks, I have thought about ‘What makes the perfect gig?’ and what a show needs to have for you to come back for more. I have broken it down to five (and a half) things that make the perfect recipe that make the ultimate gig experience. Some gigs you go to might only have one or two of these features that stand out for you but it doesn’t take away from it being one of the best gig’s you’ve ever seen.

I have also added my personal experiences of artists that I have seen over the years that I thought exceled in these elements as well for some context.
Ingredient #1 – The Setlist

What bands play to their fans is a crucial part in setting the atmosphere for the perfect evening. A band that has popular songs in one city, might not have been received well in another and as a band’s discography grows, it can be a minefield of selecting the perfect songs to entertain your audience.

The Best: Maroon 5 – O2 Academy   February 2011
Why?: Maroon 5 toured promoting their third album, ‘Hands all Over’ and after two successful albums and had started to decline in interest after a lukewarm response to this album. Little did we know that ‘Moves like Jagger’ was just around the corner and the band would see a resurgence in interest just a handful of weeks after I saw them.

They catered to their audience well in this gig, knowing that everyone wanted to hear the songs they loved, particularly from their debut album ‘Songs About Jane’ after the mixed reception of their new album rather than the new songs. As a result they only sang just 4 songs out of their 16 song set being dedicated to their album they were meant to be promoting and got a wonderful reception from the 2,500 capacity venue.

Ingredient #2: The Crowd
You cannot have a gig without some attendees, I have been to gigs varying from six people to a sold out 67,000 capacity stadium. It doesn’t matter if you don’t know all the words to the songs, you can still soak in the music and the atmosphere from the crowd and it can move you just as much as the lyrics and melodies themselves.

The Best: Passenger – Usher Hall December 2016
Why?: I have briefly touched on this in a previous blog, the engagement of Passenger’s crowd, notably in Edinburgh the first time I saw him was electric. Passenger told the audience during his set that he was going to share a story which inspired his song ‘Travelling Alone’. This heart wrenching song is about a man he met in Copenhagen whilst he was busking who was listening to him sing and got talking to Mike. He explained that he was travelling alone because him and his wife had planned to see the world and that she passed away before they could see the world so he decided to do it alone.

He asked the audience for complete silence and no phones in the air, to which all the audience did. You could’ve heard a pin drop in the sold out 2,200 capacity venue during his tale and it was hauntingly beautiful seeing not a single phone light or arms raised during those 10 minutes he shared his story and then played the song in question. It makes me a little sad to think we live in the generation where we try and capture so many memories through screens rather than living them sometimes.

Ingredient #3: The Venue
The venue has a huge impact on how your gig experience is. From important things like, how near the bar is to your seating/standing to how far away are the toilets. It all matters. As well as this, you need to consider acoustics and how good the sound guys are in dealing with the venue.

The Best: Òran Mór – Glasgow
Artists Seen: Katzenjammer (October 2012, May 2015), Nerina Pallot (November 2014, November 2017), Morgan James (November 2017)
Why?: This venue, jointly with SSE Hydro and O2 Academy (also both in Glasgow) is one I have frequented the most. This 500 capacity gig is one of Glasgow’s best known secrets. Tucked away in the West End and below a busy Church converted bar, it attracts the up and coming artists or talented artists who you might know for one flash-in-the-pan pop hit but infact have several albums under their belt of high quality material but maybe don’t quite have ‘the look’. Its a small stage with a backdrop of the venue’s logo and has a stripped back no-frills vibe. The bar is at the back and within easy access due to the small venue, with booth seats along the sides. You are pretty much guaranteed a good place to sit, stand or lean and still get a decent view of the artist and hear the artist without the blow of the speakers of the tin-like sound of the microphones. It doesn’t matter if you’re there to raise the roof, like the energetic loud sounds of Katzenjammer, to the vulnerable and soulful voice of Nerina Pallot, you are in safe hands at the venue and know that you will get the most out of your experience.

Ingredient #4: The Talent
Of course you can’t have a gig without an artist! The pressure for artists to sound like their record that you have vehemently listened to leads to sometimes a disappointing reality that your artist might not actually sound the same in real life.

The Best: Paloma Faith – O2 Academy Glasgow   January 2013
Why?:  This was a tough one to call from my personal experience. Paloma Faith stood out for me in particular as it was the first time that I can remember being blown away by someone’s sheer talent. Her vocal range and power exceeded that of her recordings and her bubbly personal transcended through the remixed versions of her songs, giving a multi-coloured presence to her mono-tone genre of ballad pop she is best known for. Her passion for her craft was evident when she kicked off her shoes and was seen sliding on top of the Grand Piano as she belted out ‘Picking up the Pieces’.

Ingredient #4A: The Artist’s showmanship
Any artist can perform great music, but having engagement with your audience that night is crucial, especially with large crowds.

The Best: Lionel Richie – SSE Hydro   March 2015
Why?: A seasoned veteran, Lionel has performed both as part of The Commodores and as a solo artist. At a man reaching his 70s, he managed his energy well between piano and standing to ensure he gave his concert 110%. He thanked his audience for not only coming but enjoying his music over half a century, paying credit to the generations that have listened to his music.

Whilst playing a few songs, he spoke about how he has been there for his fans through the various times when they have found, lost and made love. He playfully done this by listing the ways his records have been produced over the years, saying that his fans would grab ‘Their Vinyl,  8-Track, Cassette, CD and Download’ and call on….Lionel. The audience erupted in laughter at how music has evolved over the artist’s career.

His breaks in between songs were full of one liners and tongue-in-cheek jokes catered for all.

The stage design plays more that one would initially think about your gig experience. It can be something as simple as one artist standing with a microphone to a full band and decorative outfits and props. How your stage is dressed can give a true insight that the artist is trying to portray as part of their image and can greatly impact your experience, be it the use of props of the interaction with the band and backup singers.

Special Mention: The Foo Fighters – BT Murrayfield Stadium   September 2015.
Why?: This naturally had to get a nod for set design for accommodating Dave Grohl with his broken leg by giving him a moving chair modelled on the Iron Throne from ‘The Game of Thrones’  , replacing the swords with rotating lights and guitars. Teamed with the excessive head banging and kicking on his non broken leg, this by no means took away from Dave Grohl’s energetic personality and performance.

The Best: Marina & The Diamonds – Fat Sam’s   October 2013
Why?: Marina Diamantis’ stage design was one to behold on her ‘The Lonely Hearts Club’ Tour. Complete with a Chaise Lounge full of cushions and a small Poodle plushie, a retro TV playing clips from music videos and a coat hanger with some outfit accessories to assist with her performance. This comfortable set and use of the props felt you were hearing Marina’s tales of heartbreak from her very own retro sitting room. All this was executed with her band on set without making the stage look too cluttered and adorned with a bright neon sign with her album title, ‘Electra Heart’. 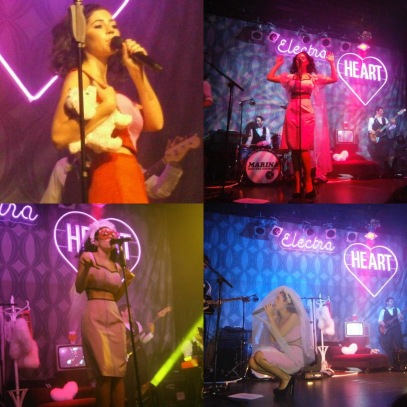 So there you have it! Do you agree with my ingredients? What makes a gig great for you?